Martinez Bail Bond Store| A Bondsman Is Your Best Friend

A bail bondsman can be someone’s best friend when they’ve been arrested. This is even truer for the bondsmen at ...
Read More

Most people don’t know that bail bonds can benefit the community. Well it does if the bail bonds agency is ...
Read More

Albany Bail Bond Store Helps Those Who Need It

Getting yourself or a loved one out of jail can be tough and frustrating. You may feel like everyone is ...
Read More

In today’s world, it can often be hard to find a company that is both available everywhere, and has great ...
Read More

Getting Arrested Can Be A Lengthy Process

Getting arrested can usually be a lengthy process. The actual act can be done in a heartbeat, but then comes ...
Read More 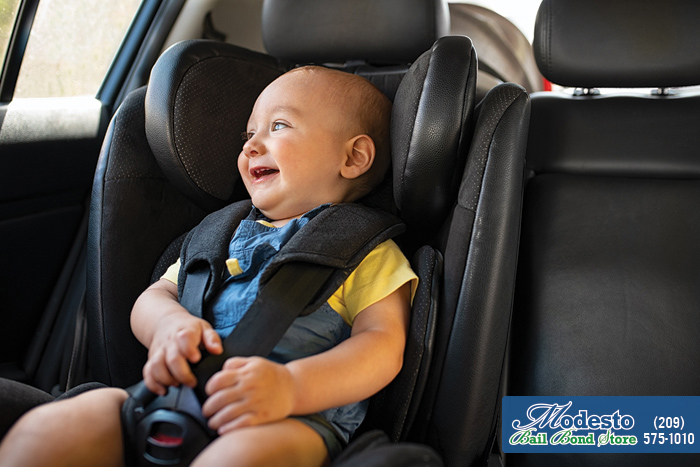 Any child that is two or under must be confined to a rear-facing car seat while they are in a vehicle. Failing to have your child properly secured in a car seat will result in a $500 fine and a point getting added to your driving record. Don’t assume that just because your child has passed their second birthday that it’s time to change their car seat. The law also states that the child needs to be at least 40 inches tall and or weigh at least 40 pounds before they graduate to a different type of car seat.

Car Seats For Children Between Ages 2 And 8

If your child has already celebrated their second birthday and also meets the height and weight requirements, you’re allowed to replace their rear-facing car seat for a front-facing model. California lawmakers won’t prevent you from making this transition, but they do want you to understand that the rear-facing car seats are considered 500% safer than the front-facing models.

There is no set age when your child can officially move out of their car seat and into a booster seat. California’s child car seat laws state that the transition can happen once your child has reached a height or weight that exceeds the limits of your front-facing car seat. In most cases, the child will be about 65 pounds. There are no requirements about the type of booster seat your child uses, though it does have to be a seat that can be safely installed in the car.

Your child is allowed to move out of the booster seat when they turn 8 or when they reach a height of 4’9”.

Make Sure The Car Seat Is Properly Installed

An improperly installed car seat is nearly as dangerous as driving around without your child in a car seat. Don’t assume that you know what you’re doing. Whenever you get a new car seat or a new car, it’s in your best interest to take the entire setup to your nearest police station. One of the officers will happily examine the car seat and make sure it’s properly installed.

Rather than moving the car seat from one car to another, you should keep a car seat in each vehicle. Not taking the seat in and out of different vehicles not only extends the life of the car seat but also reduces the risk of it not getting installed properly.

You owe it to your child to stay abreast of the latest California laws pertaining to car seats.